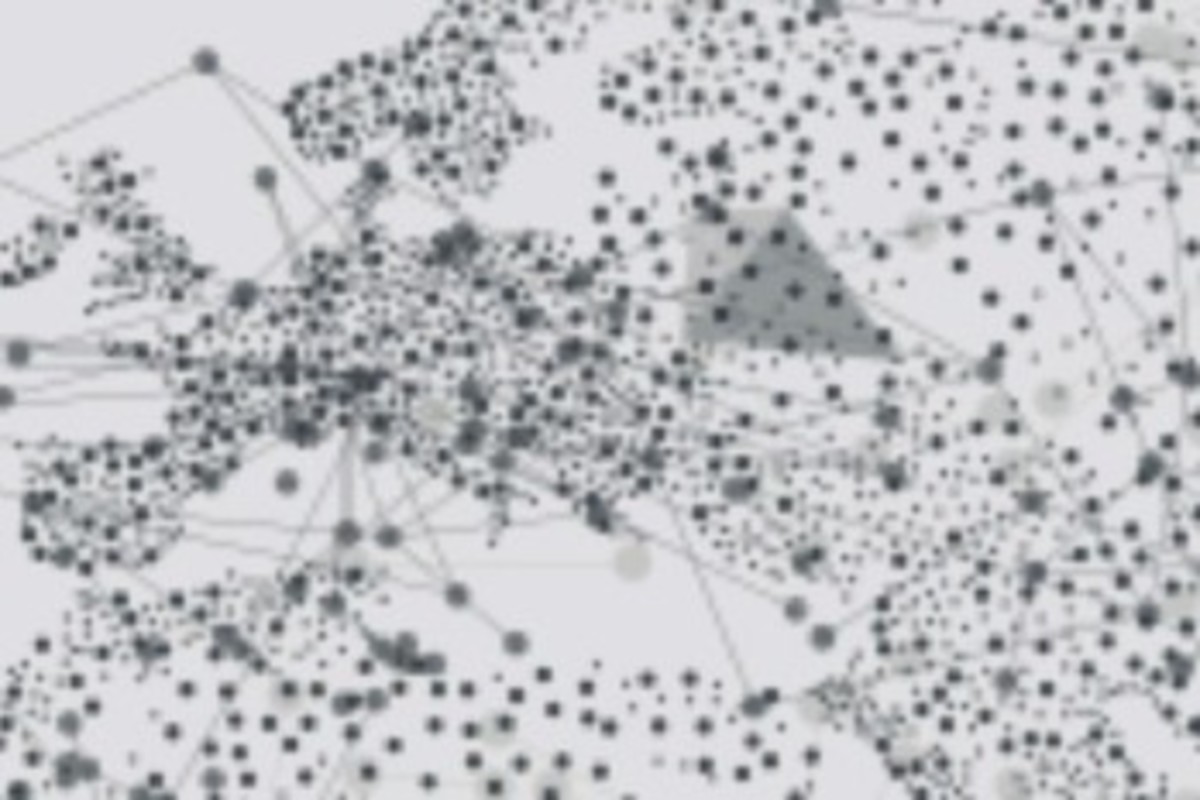 We are launching Marathon Venture Capital with the goal of fostering innovation coming out of the world wide Greek network of entrepreneurs and technologists. On Friday March 17th, we presented our team, goals and ambitions for the new vehicle. If you missed our live presentation you can read here everything we talked about. 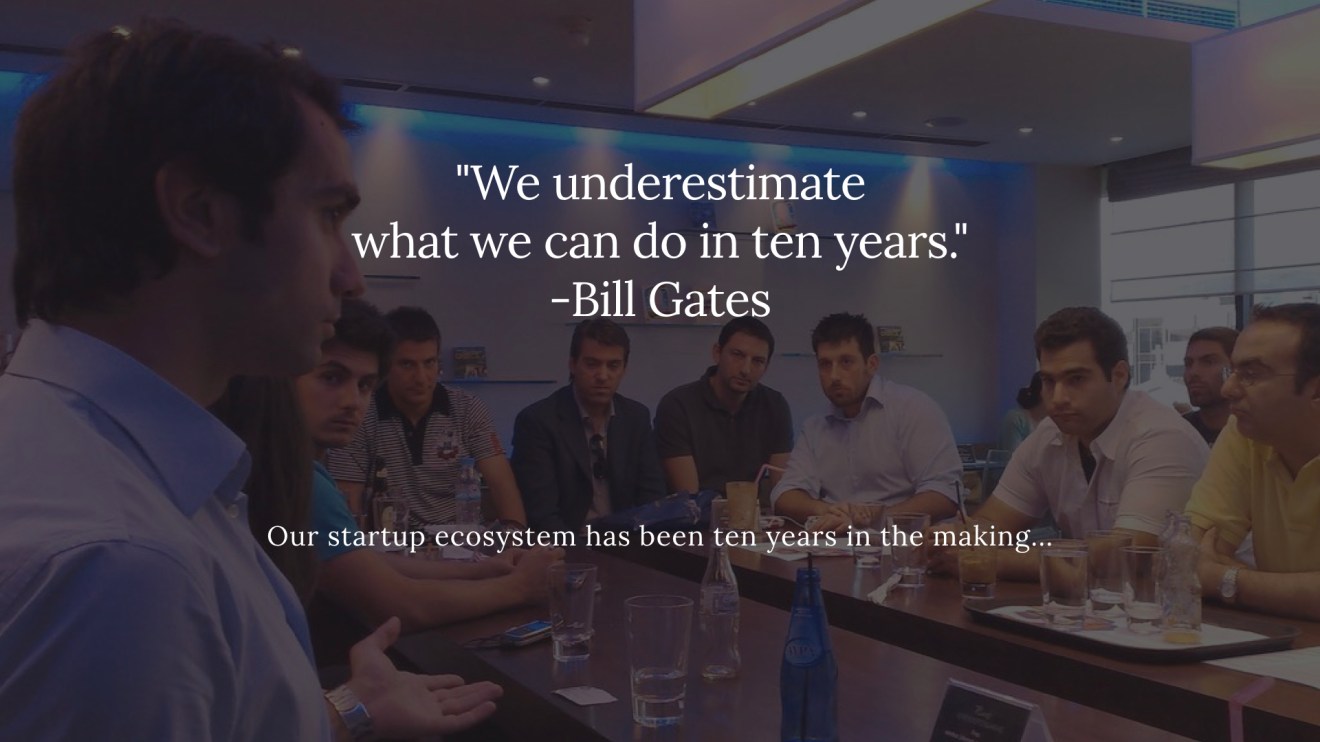 It has been ten years since the inaugural Open Coffee meeting in Athens. Such monthly meetups gave birth to a dynamic entrepreneurial community. Let us start with an attempt, to sum up how far we have come. 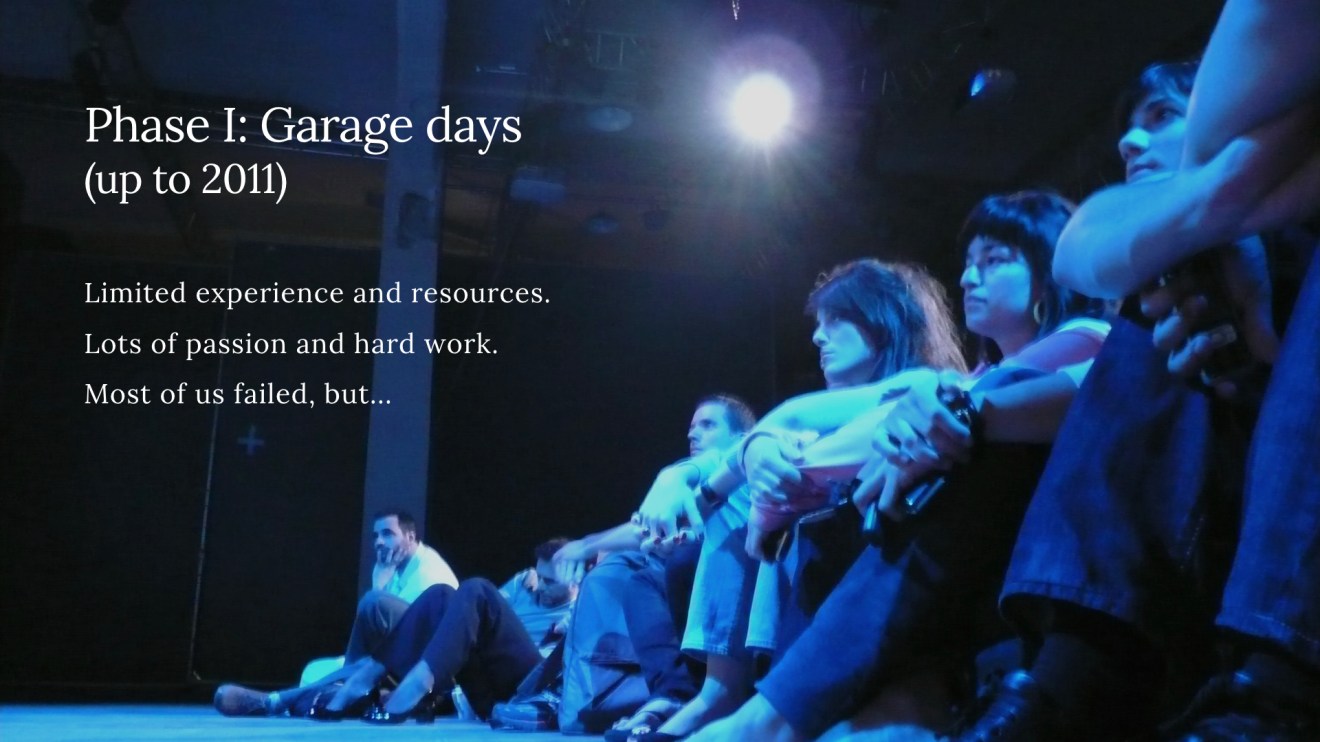 We started without knowing or having much; back then, startups were few, the experience was limited and capital was non-existent. Unsurprisingly, failure was the default outcome. That said, there were a few exceptions. 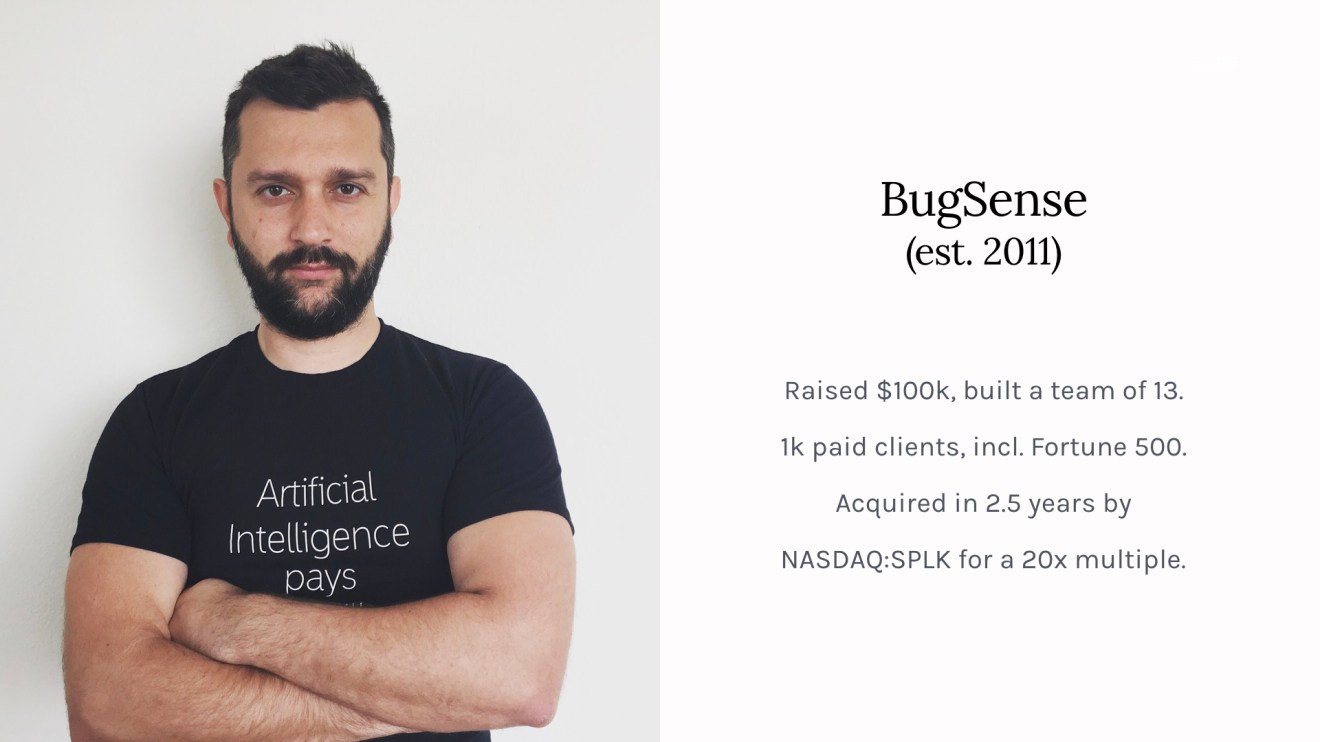 Jon Vlachogiannis and Panos Papadopoulos founded Bugsense in 2011. With minimal funding, they managed to become one of the most popular tools for mobile developers. Splunk acquired the company two and a half years later to enhance its offering with mobile data; it was the first exit of a Greek startup to a US public company. 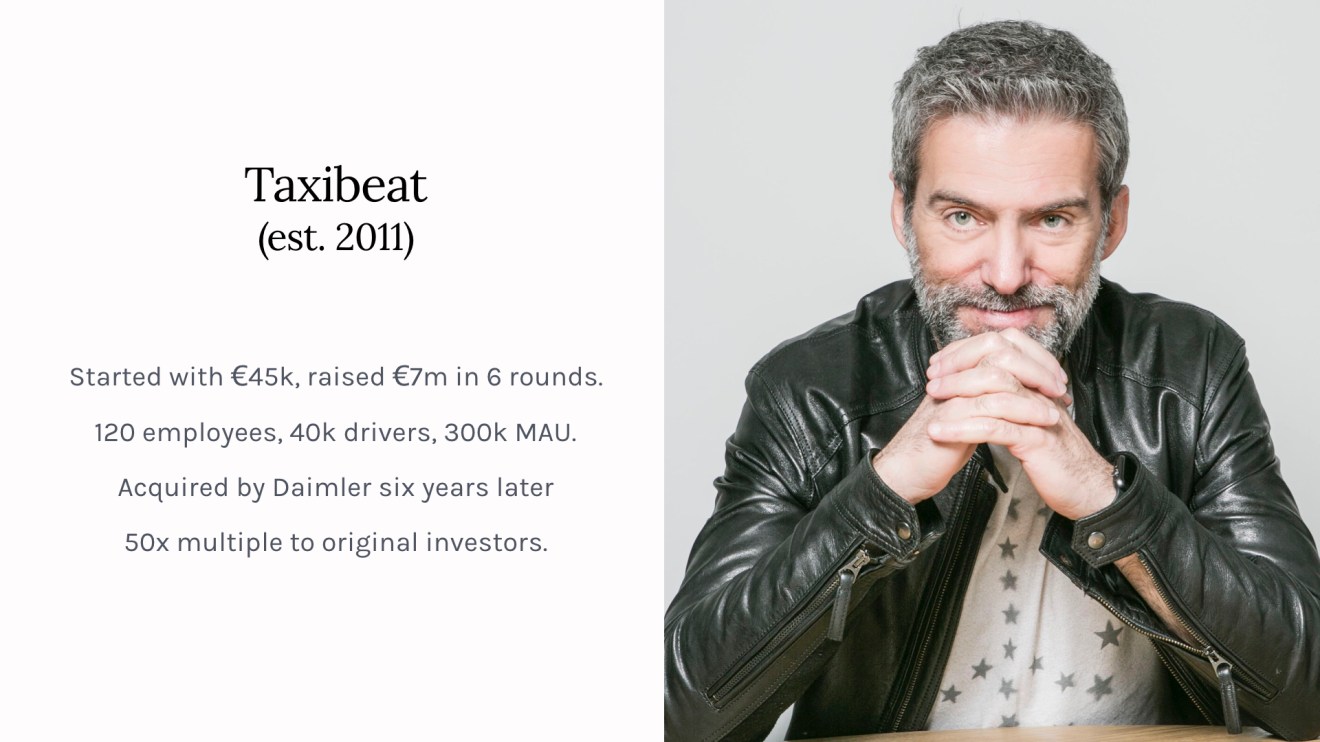 Nikos Drandakis founded Taxibeat in 2011, starting with a €45k investment. Amid various accomplishments and challenges, the company today serves 40k drivers and 300k MAU in Athens and Lima, Peru. A month ago, Daimler, via its subsidiary MyTaxi, acquired Taxibeat in the most prominent acquisition in our ecosystem so far. 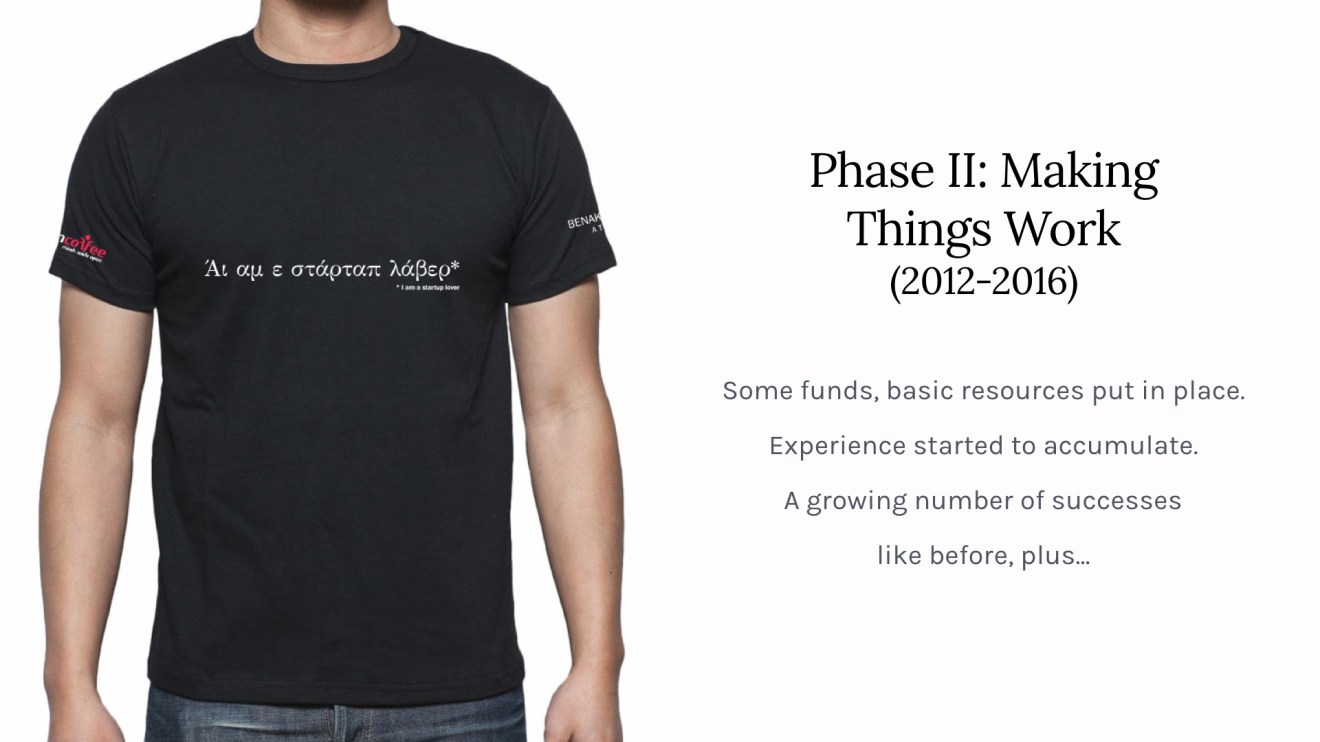 In 2012 things started to evolve. A few funds and some resources were put in place, while founders were a bit more experienced and startups became cool. Successes were not rare anymore; a double-digit of successful exits have taken place already or are bound to happen soon. What’s more, there are a few cases that seem to have taken things a bit further. 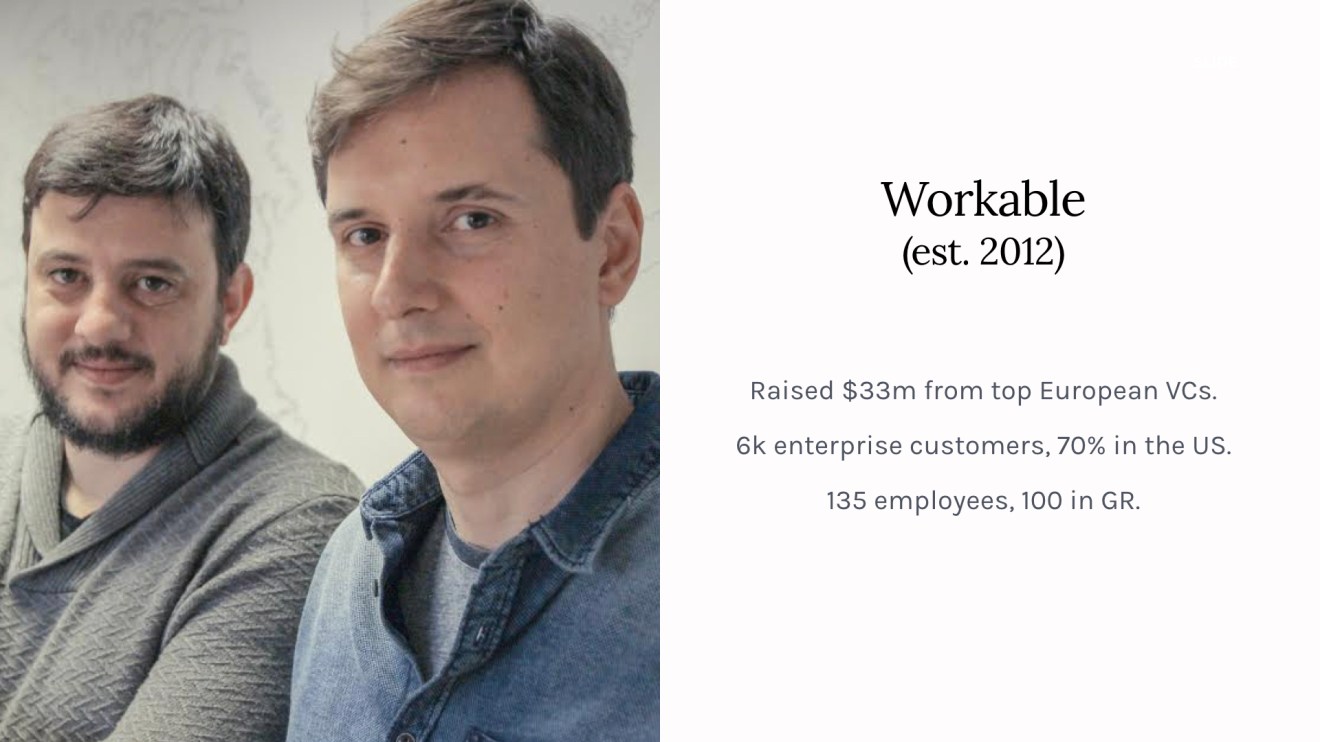 Nikos Moraitakis and Spyros Magiatis founded Workable in late 2012. Four short years later, the company has raised $33m in four investment rounds by some of the best European investors. It currently serves six thousand enterprises across the globe, the majority of them based in the US. Its HQ have now moved to Boston, while its engineering department and most of its workforce is maintained in Athens. And it’s not just Workable. 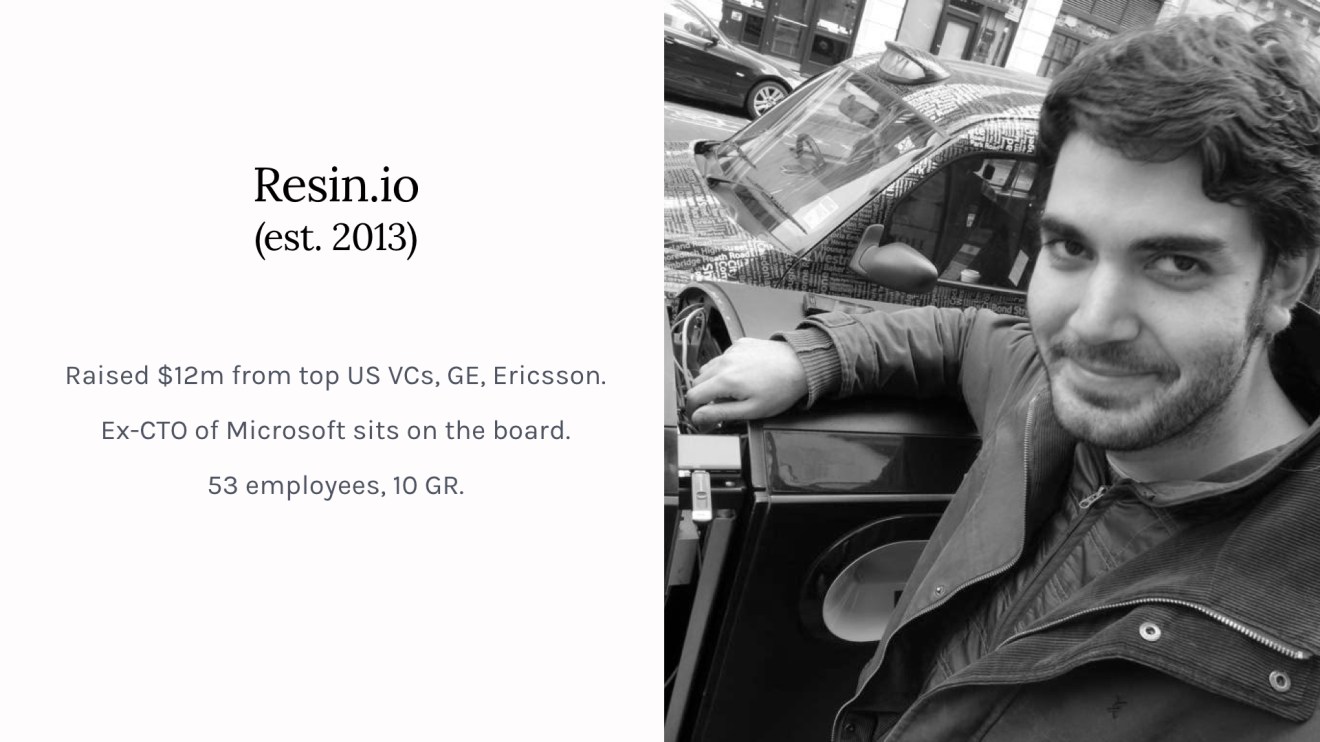 Alexandros Marinos founded Resin.io in 2013. Since then, he has raised a couple of investment rounds from top US VCs, as well as General Electric and Ericsson, while Ray Ozzie sits on the company’s board. The company is now headquartered in Seattle, its 53 employees across the globe are trying to make IoT software development as easy as software development on the web. 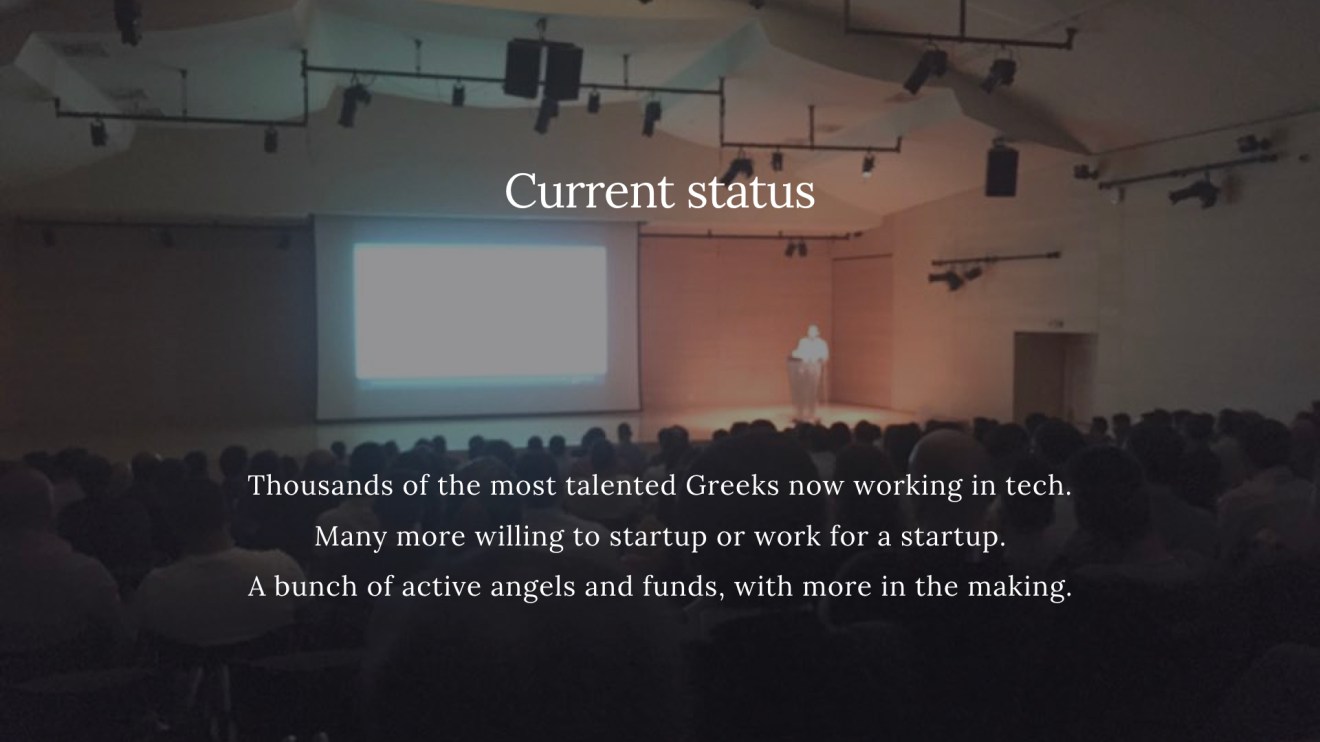 So, this is where we stand today. Our community has grown strong; startups have eventually become the talk of the town. More importantly, some of the most talented Greeks are now working in technology companies, while many more are following suit. 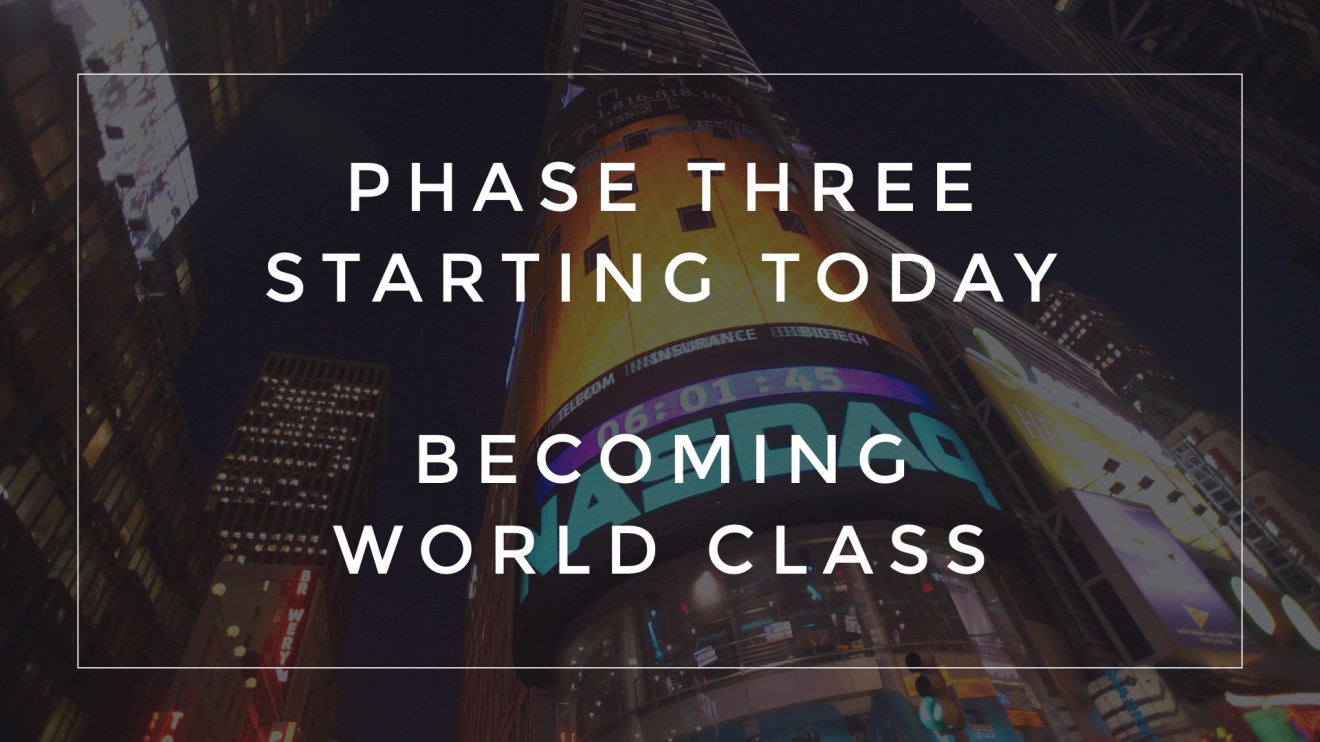 To us, today marks the beginning of the third phase in the development of our ecosystem. The target is clear: World-class companies used to be an exception; they now need to become the norm. 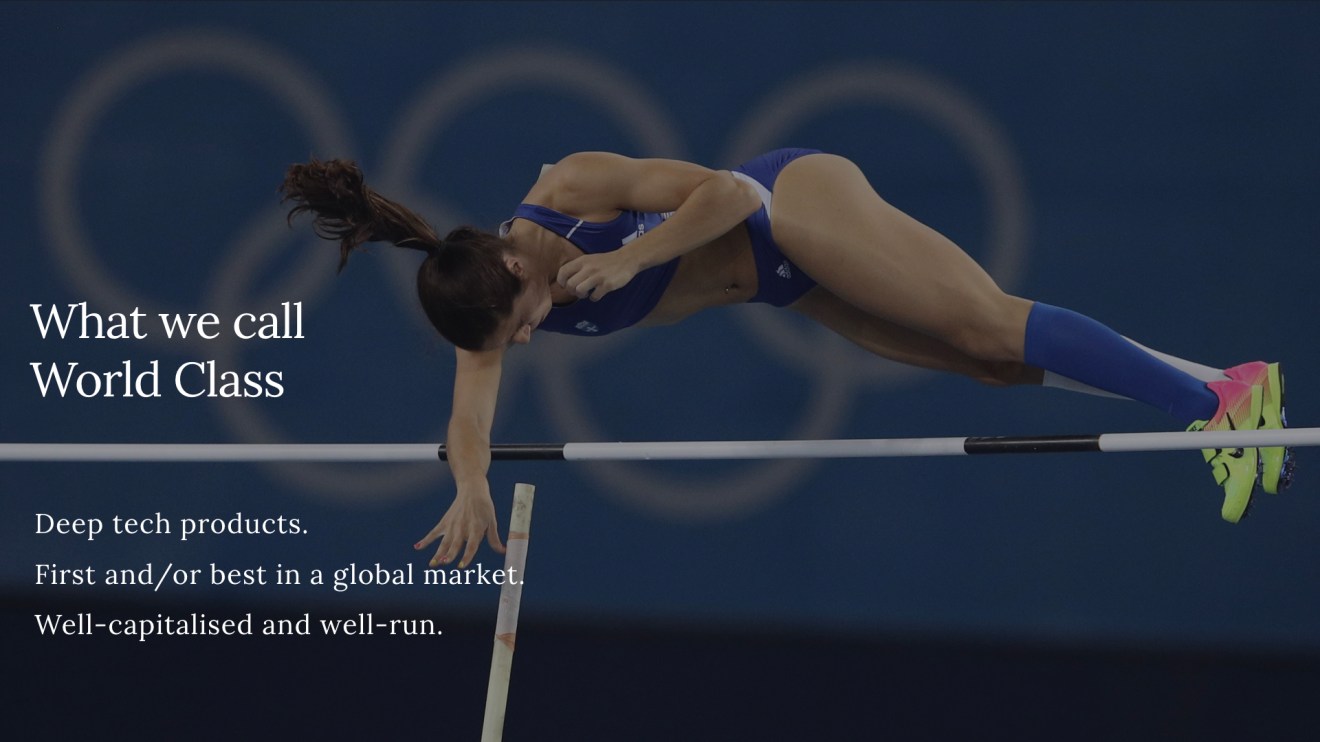 Being world class is about both the quality of your work and the scale of your ambition. The target should be to become the best, and you should not be limited by resources. 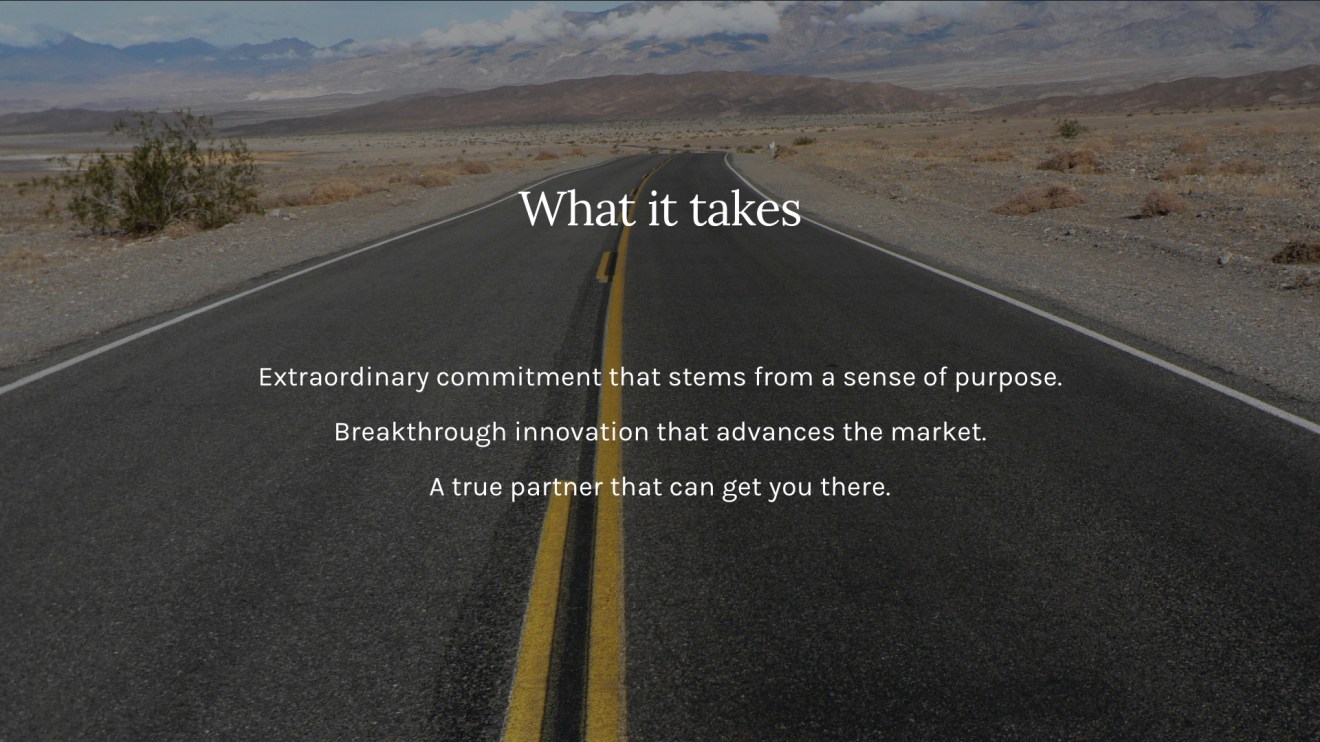 Although it is possible, it is certainly not easy. Going through Death Valley requires a level of commitment that stems from a sense of purpose. Technology is the catalyst for change, and it usually takes a proper partner to get you there. 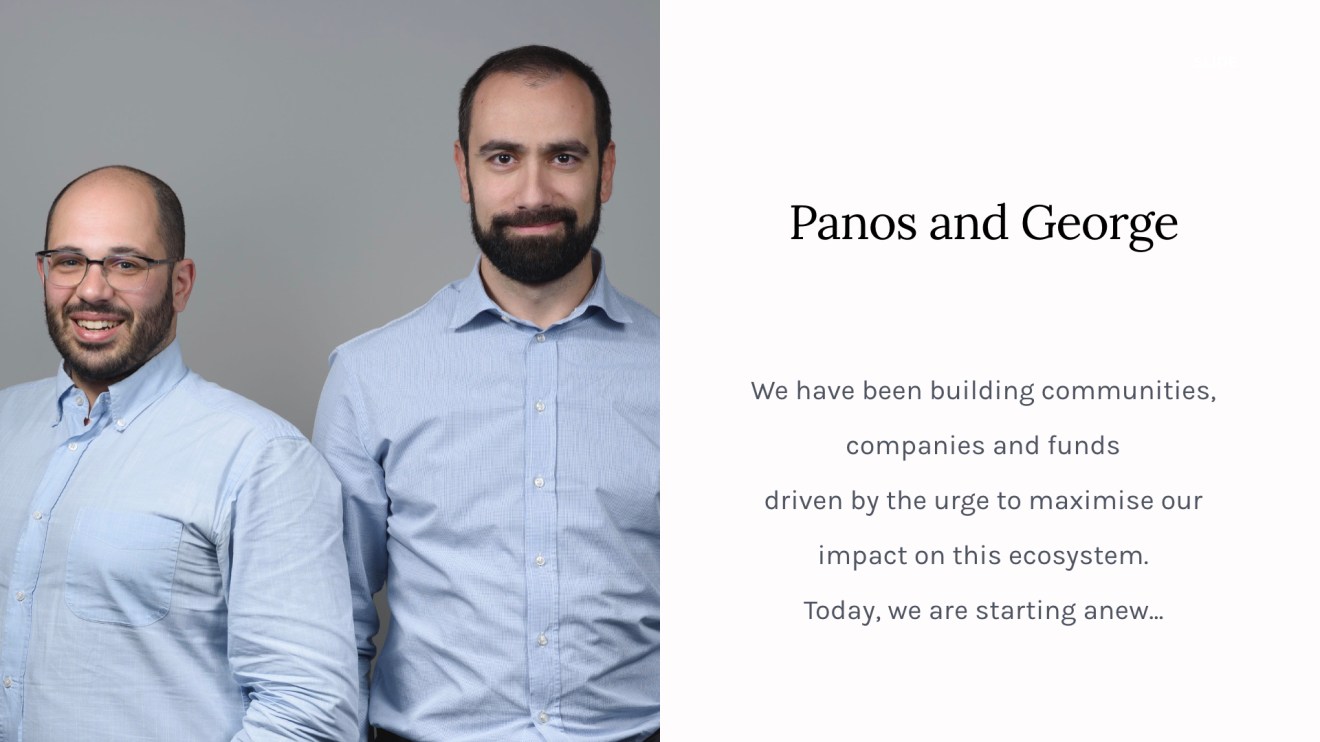 For the last ten years, George Tziralis and Panos Papadopoulos have been building communities, companies and funds, driven by the urge to have an impact on the ecosystem they helped create. Today, we are starting anew… 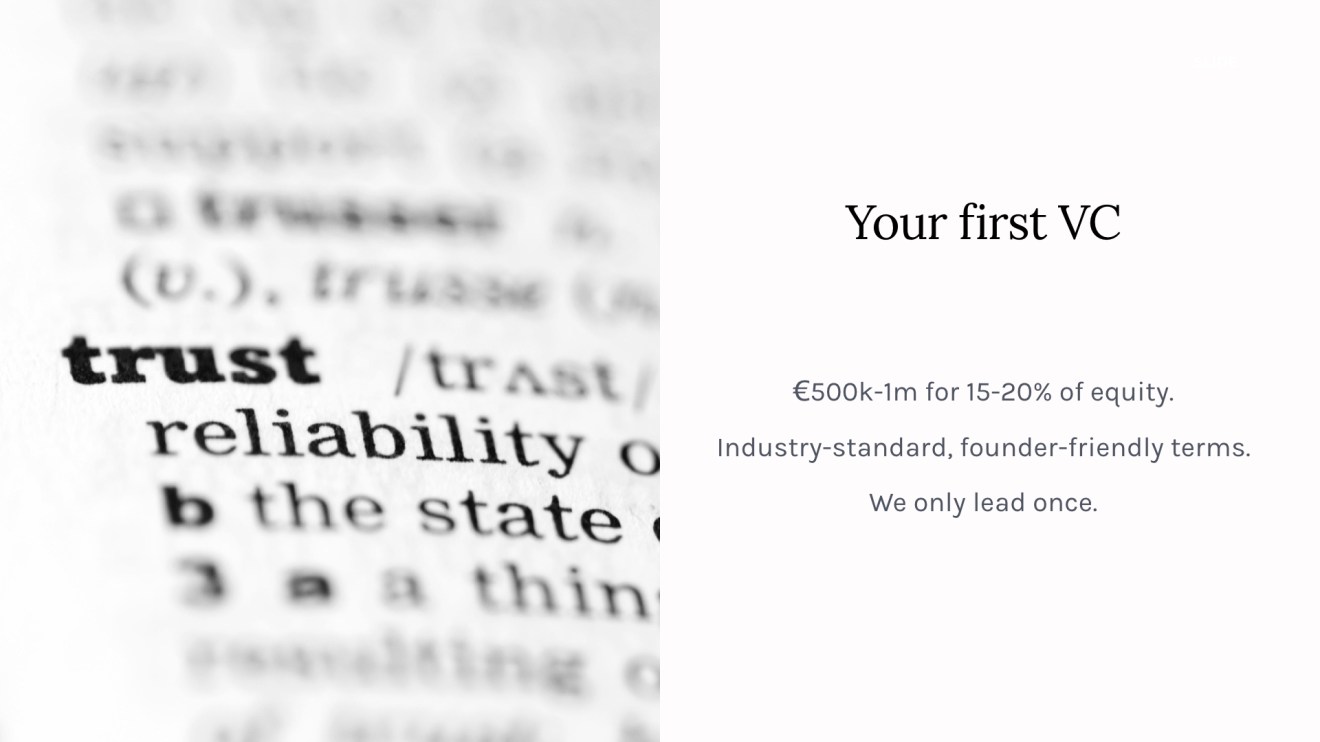 We are happy to announce the commencement of operations of a new venture capital fund that aspires to help the most ambitious Greek founders build world-class technology companies. We actively manage €32m and we are backed by EquiFund, the EIF and a broad private investor base from various industries including tech, media, shipping, and finance. We are going to lead seed rounds by contributing €500k-1m, typically for 15-20% of equity. We measure our success by the caliber of your next investors and we intend to offer what founders need to get the company to a Series A round led by top European and US VCs. 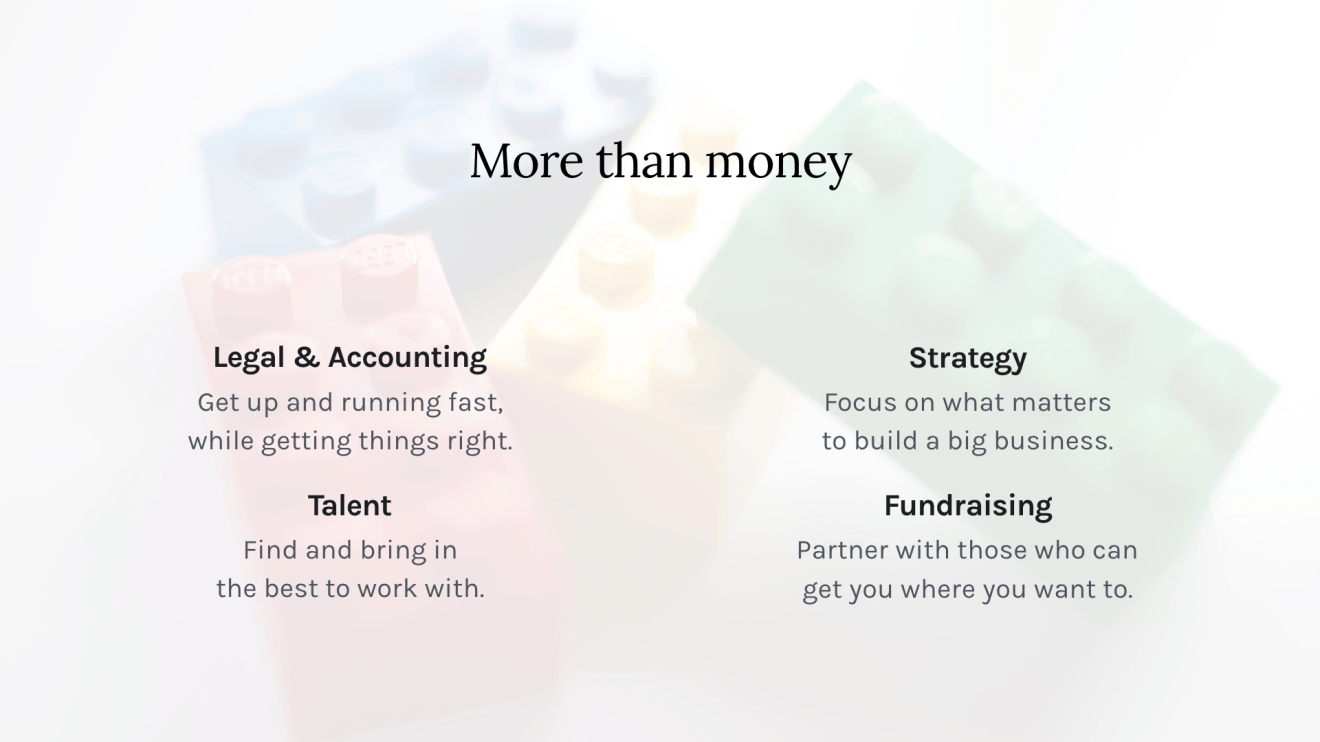 Our job is to help founders focus on what matters to build a big business. To assist, we help with compliance (templates, vetted service providers), talent (access to top talent per core skill set), strategy (suggesting core targets to meet that will unlock the next round) and fundraising (access to most relevant top-tier investors). 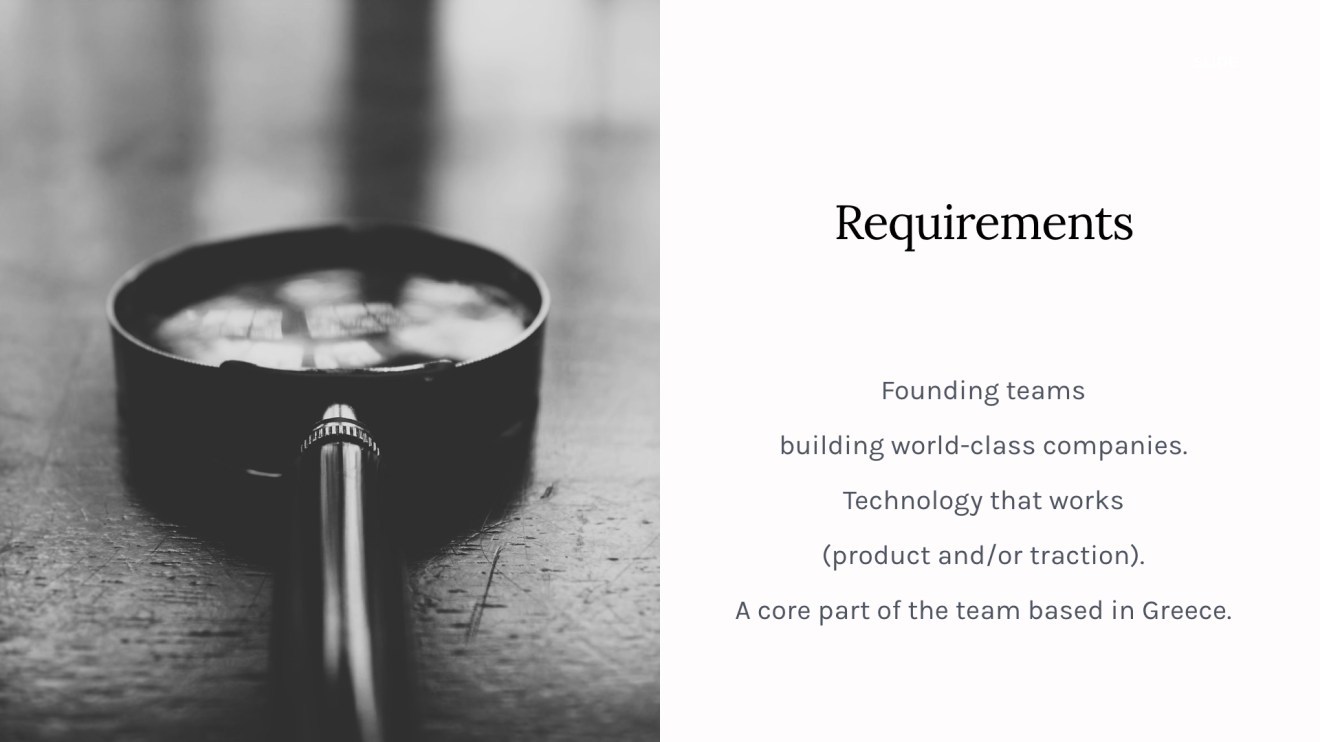 We are looking for founding teams which are building world-class companies. We are leading seed rounds, so we require a product that works, plus some validation. A core part of the team should be based in Greece. We welcome cases where some of the teams are based elsewhere; ideally, say, the CTO may build engineering in Greece, while the CEO may build commercial operations where the clients are (US/UK, etc). 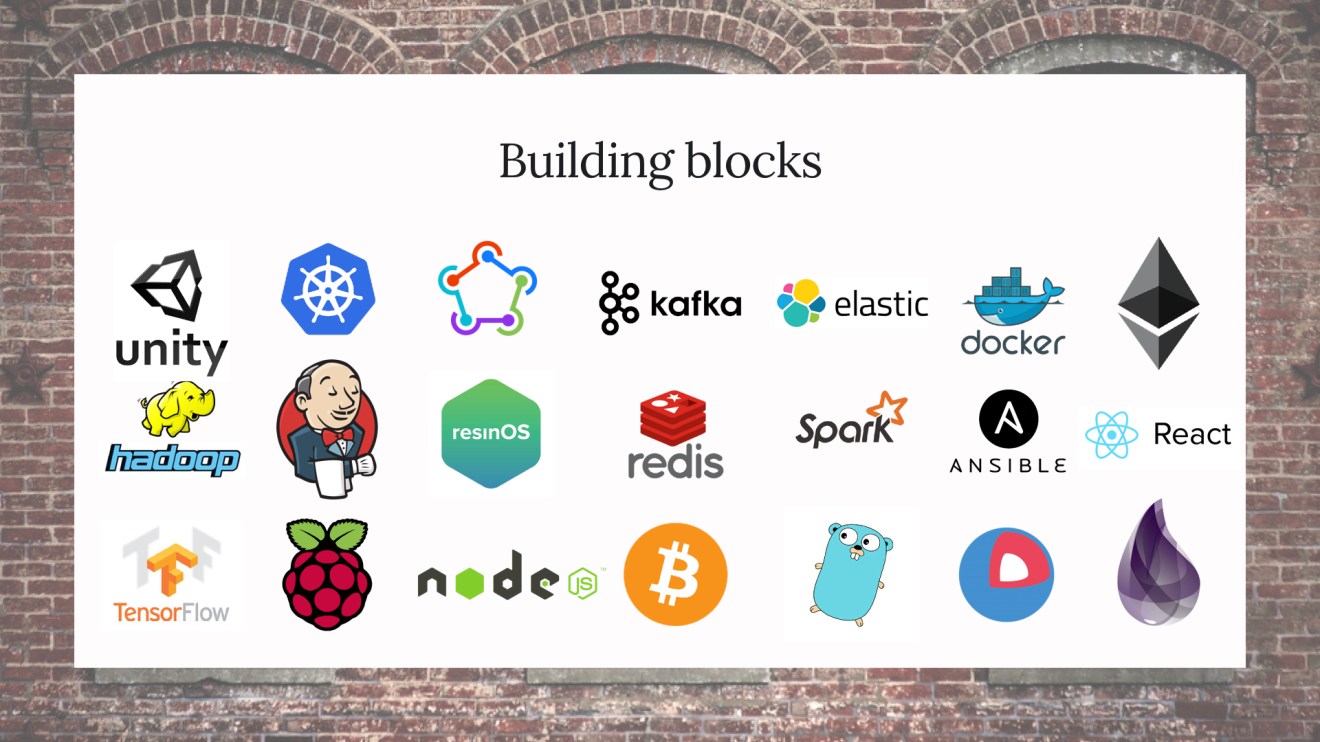 We are agnostic when it comes to verticals; we are interested in software-enabled products that advance the state-of-the-art in the industry. We love specific technologies, though; if you’re addressing a big problem using these or similar blocks, we’d love to talk. 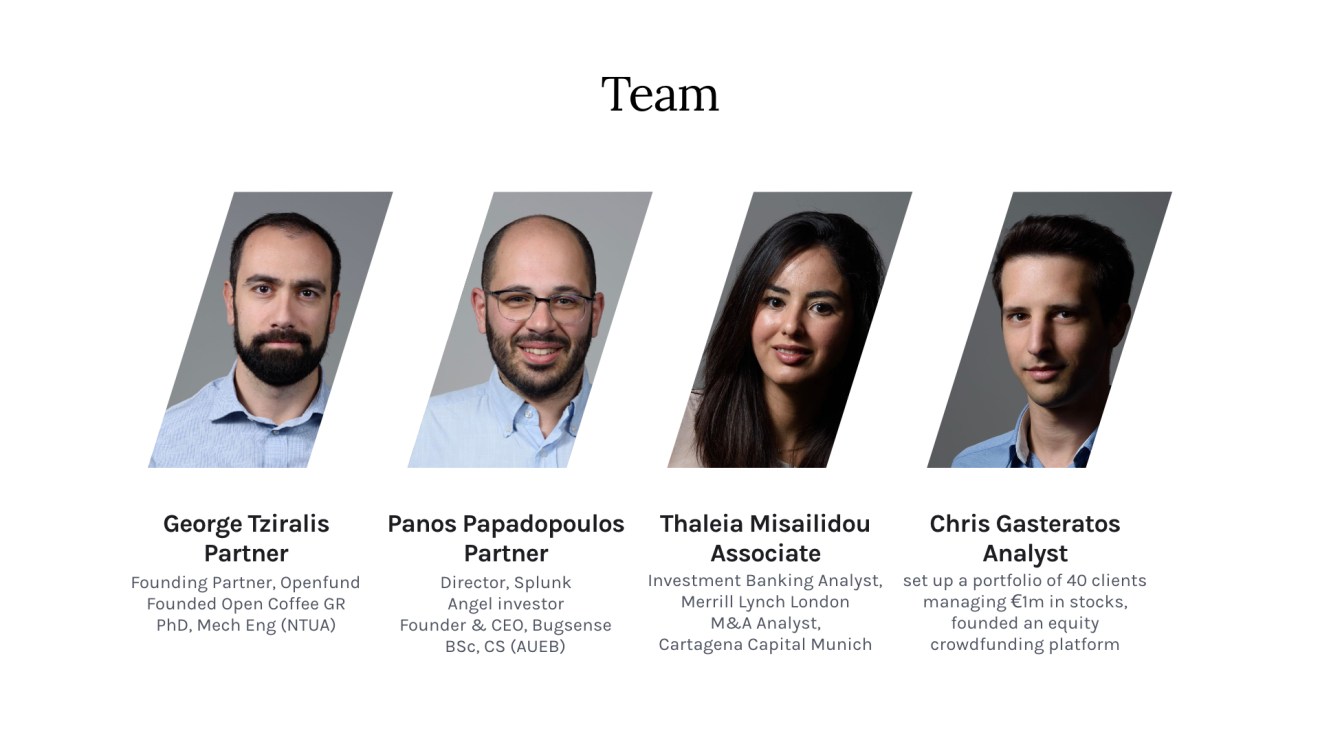 We are a young and ambitious team ourselves, on a mission to help Greek founders build world-class technology companies that are going to be profoundly successful and change the landscape of our ecosystem. We stand for uncompromising integrity, radical openness and giving back to our community. 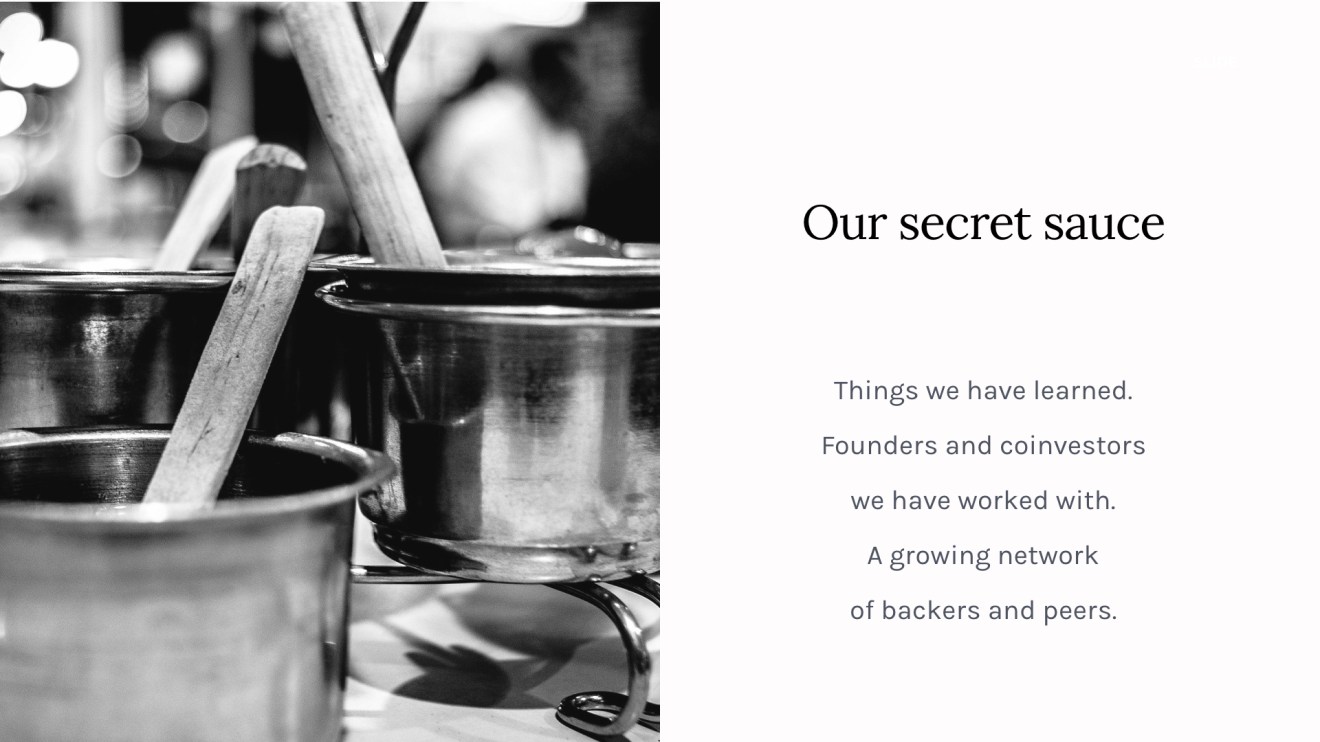 Our not-so-secret sauce is the things we have learned through our many failures and few successes so far, the founders and coinvestors we have worked with and our growing network of backers and peers. 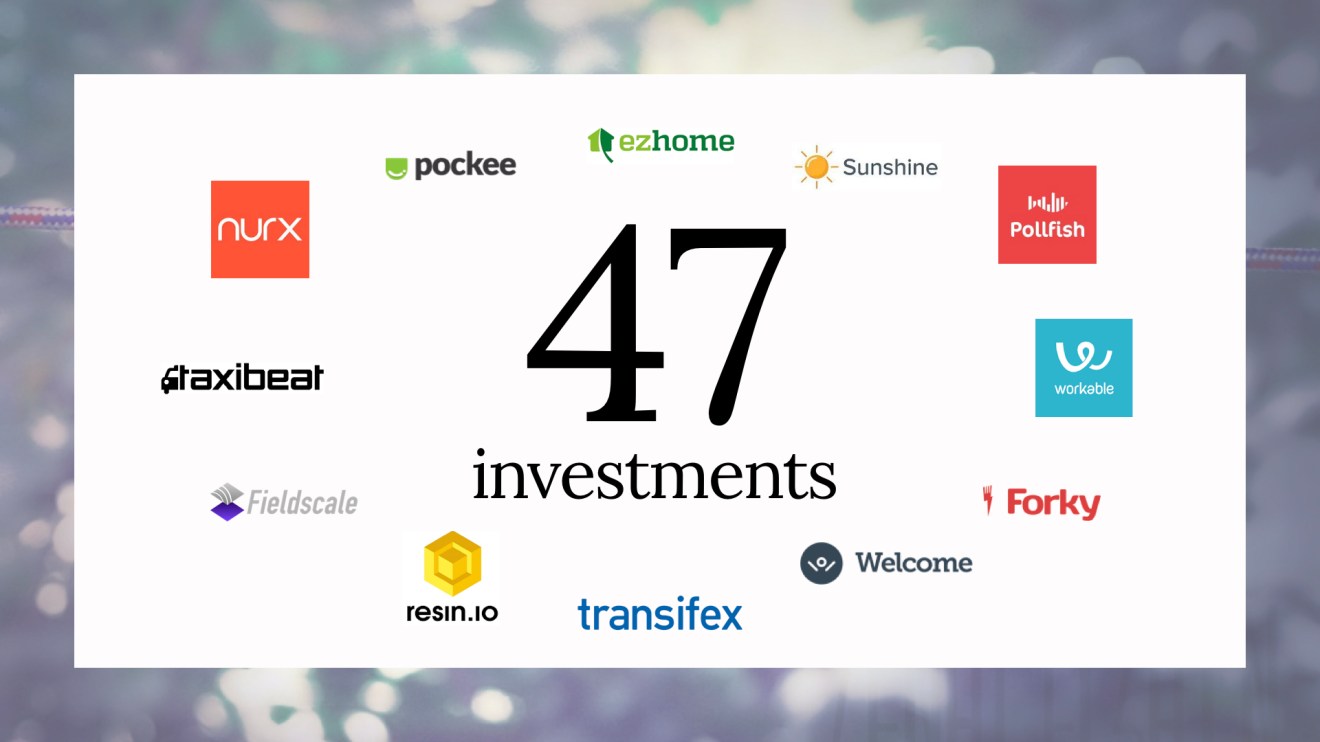 More specifically, we have invested in 47 companies in the past in our capacity as fund managers and angel investors. They come with an abundance of experiences and emotions; most importantly with a great number of fellow entrepreneurs we are fortunate enough to call friends. 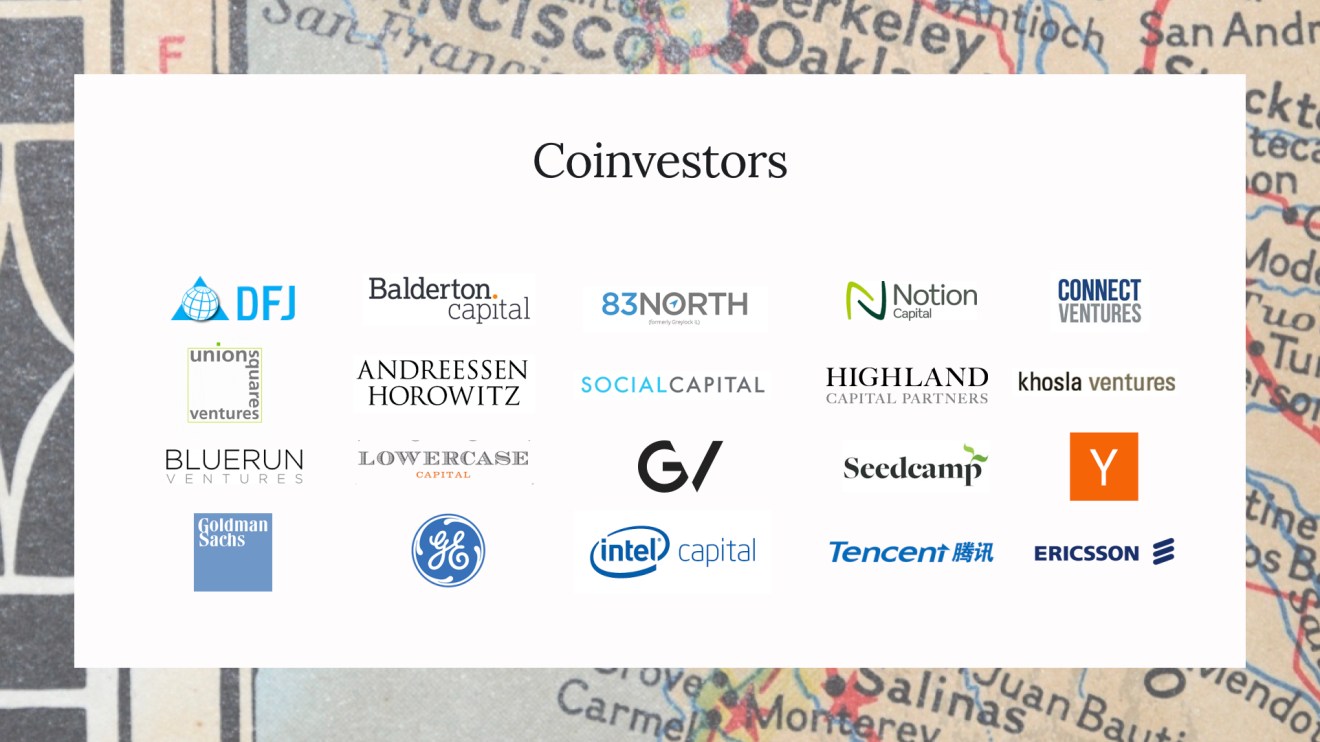 This is a list of coinvestors in past portfolio companies that we could not have imagined a few years ago. We have built deal flow relationships with some of the best funds out there, and we are just getting started. Again, we assess our performance based on the caliber of your next stage investor. 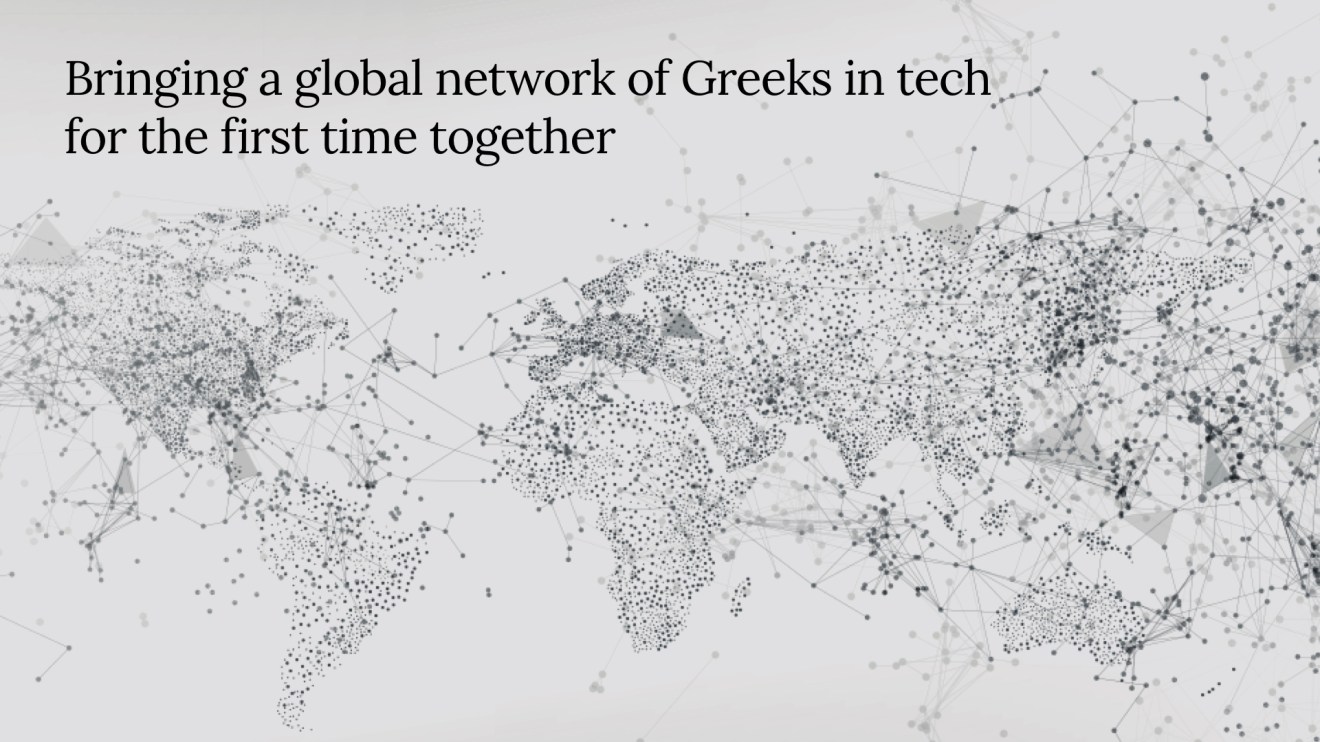 At the end of the day, first and foremost we are network builders. Others have been doing the same with Stanford graduates, Paypal employees or Israeli founders. We bring together Greeks, working in technology, no matter where they are, and we are thrilled about the ubiquity and underlying value of our network. 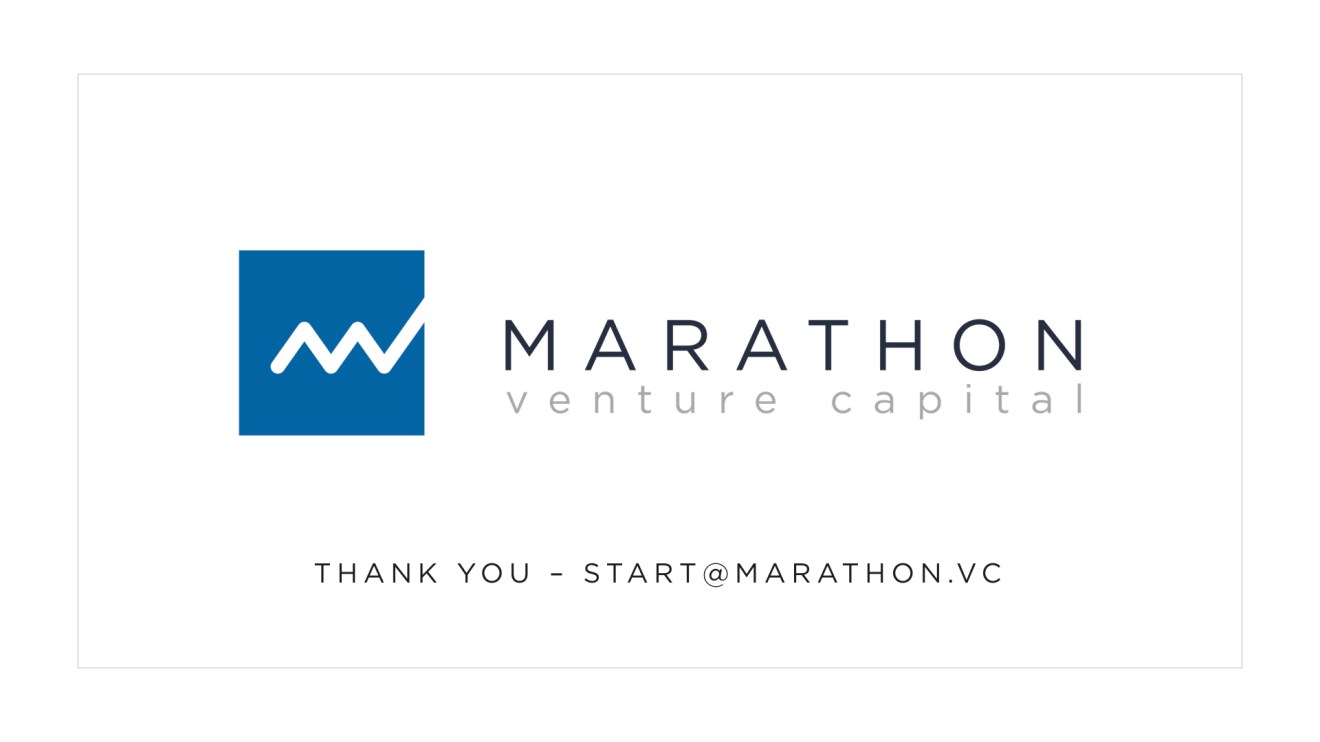 Make no mistake, this is just the beginning, and we have a long way ahead. Today, we are launching Marathon Venture Capital to help ambitious founders build world-class companies.

If you are one of them, we’d love to hear from you at start@marathon.vc. Thank you!